Our legacy.  Our life’s work.  That one piece of ourselves we leave behind.  An undertaking we are so passionate about we can never put it to rest.  It doesn’t require willpower to motivate us, our visions have a power all their own. An unseen driving force that keeps us awake at night and gnaws at us during the day.  Where does this kind of motivation come from and why do we possess it? It seems that we are on this earth to do more than just merely survive.  We dream. We innovate. We create.  Some of our dreams may seem crazy or farfetched to others, yet to us they are our most cherished possessions and are worth all of the effort we can muster… and then maybe just a little bit more.

Out here in Missouri – in the foothills of the Ozarks – I came across the remains of the lifework of one man. A man with a lofty dream – a passion that relentlessly consumed him both day and night and led him on a labor of love and a journey of faith that continued throughout his life. 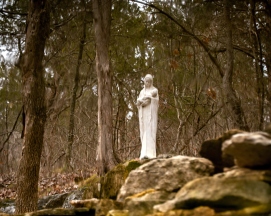 Brother Bronislaus Luszcz was a Franciscan monk who immigrated to the St. Louis area from Poland in 1927.  In his native country, he grew up watching pilgrims make their way to the Shrine of St. Mary.  These pilgrims would travel hundreds of miles on foot and sleep along the road to pay homage to the Queen of Peace. Brother Bronislaus developed a great devotion for Mary during his formative years, a devotion that never relented.

When Bronislaus came to the United States, he was one of several Brothers who were put to work establishing St. Joseph’s Hill Infirmary – a convalescent home for men, nestled back on a wooded hillside on the outskirts of the towns of Eureka and Pacific Missouri.  It was in this peaceful environment one day in 1937 that Brother Bronislaus embarked on what would be his life’s work – a series of stone grottoes built entirely by hand with nothing more than a sledgehammer and an axe. What remains now is a tribute to his faith and the culmination of over 20 years of backbreaking labor.

The stone for his monuments was locally quarried and dropped off on the site by the dump truck full.  Each grotto is uniquely decorated with trinkets that were donated for such a purpose by faithful followers and fans.  Pieces of old costume jewelry, sea shells, pottery, loose change, broken bottles, small porcelain statues and many other objects were all artistically arranged and set into the stone. The variety of items are amazing and endless.  Nothing went unused. 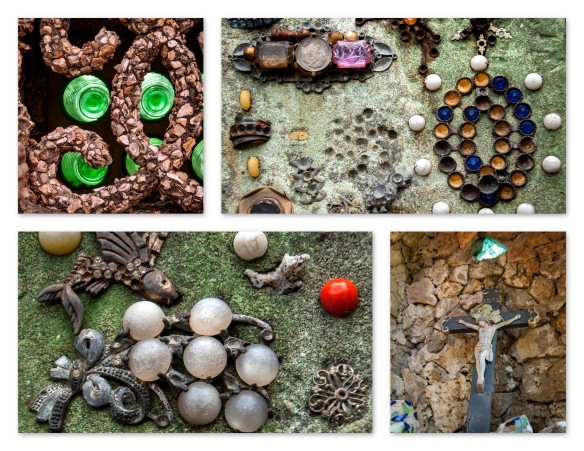 At this time, the area was very remote and much of Bronislaus raw materials were limited

to what was on the monastery grounds, so he became creative with his own unique construction and adornments. He raided the infirmary’s kitchen and confiscated pots and pans.  Cake pans shaped like lambs and rabbits became molds for the concrete animals that sit at the feet of St. Francis.  Jell-O molds, cupcake tins and discarded light fixtures were the basis for the floral decorations that embellish the corners of his tributes to St. Mary and St. Joseph.  Colored glass bottles set into recesses along the walls became makeshift stained glass windows.

And so he toiled for 22 years. Clearing land, breaking stone, mitigating through trial and err

or, honing his skill. A slave to his own labors, each monument became more elaborate and fantastic than the last. Then one day, just after his 66th birthday, Bronislaus was beginning construction on his newest grotto, in honor of Our Lady of Fatima.  It was a hot day in the summer of 1960 and Bronislaus was recovering from a bout with the flu when he was overcome by the heat.  He managed to make his way across the courtyard to where the statue of St. Mary stood sentinel in the Our Lady of Perpetual Help Grotto.  Collapsing on the stones at her feet in the August afternoon sun, he lay gazing up at the statue of his beloved Madonna. Her outstretched hand reaching to take him back home where he would toil no longer. Later that day, when he did not return to the monastery for evening prayers, the other Brothers came to look for him, a trail of tools led them to his earthly remains. This very spot is now marked with a seashell, to honor his memory in the place of his own creation. His vision was now a reality, his accomplishment and his legacy.

However, the fact still remains that Bronislaus wasn’t finished, his accomplishments were not completed, nor would they ever be no matter how long he lived.  When you look around the rest of the grounds, you will see them dotting the landscape here and there.  Grotto-less statues of Saints awaiting their turn to be humbled by the unique creativity of one man.  In his mind there would never be a last grotto.  As long as he was still alive, the construction would have continued.  You see, once you find your life’s work the only thing that ends it is your death.  No matter what your passion – there will always be another animal to save, another mouth to feed, another picture to paint, another novel to write, another song to sing.  It’s not the completion of the job that is satisfying, it’s the doing. 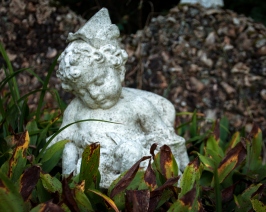 We climb the ladder one rung at a time but never reach the top.  It’s like a magical beanstalk that keeps growing as we climb. The end appears to be within reach, but we can’t quite get there.  No matter how much we do, it’s just not enough. There’s always something bigger, something better around the corner.  A new idea, another adventure and so we surrender ourselves to this work.  We just do it, for no other reason than doing it makes us feel fulfilled.

So here remains the culmination of the life’s work of one man.  To me this place is an inspiration, it has a rustic beauty, an uncommon charm but also a hint of sadness.  Did Bronislaus expect pilgrims to come from hundreds of miles away to worship at the shrines he created?  Perhaps he did; perhaps they did at one time.  But now these architectural feats of local stone, loose change and random artifacts are falling into disrepair.  There is no funding to pay for their upkeep. The Archdiocese does not give money for repairs.  The only caretakers are the handful of remaining Franciscan Brothers who are still at the monastery just down the road.  The infirmary closed its doors in 2008.  How long before the monastery follows and no-one is left to oversee this hidden gem?

In a way it’s quite bittersweet when you think about it, we spend our whole lives working on the things we love – gardens, artwork, music, poetry. Yet for all the joy these things bring us, for most of us when we go…these things will go with us.  They will be lost in time, succumb to the elements and be given back to the earth.  Maybe a few pieces will remain for a while with the people we loved, the lives we’ve touched.

As I stand back at a distance and survey this place on a Sunday morning in late July, I can see the sun rising through the trees just behind the very grotto where Bronislaus breathed his last breath.  I can envision him looking down through the sun’s rays and smiling at the beauty of it all.  The hills, the trees, the grottoes, the country side.  The essence of his soul will always remain in this place.

In the end, I suppose it’s not really the creations that we leave behind that matters, it’s the inspiration we evoke in others when they come to understand the joy, the hope and the passion that we lived by. So will they come?  They may after all, maybe not in droves, but it only takes one spark to rekindle a long lost flame.

1 thought on “If You Build It, Will They Come?”